In his renowned ‘Manifesto on Dance’, Mehmet Sander writes that ‘creating dance on an emotional basis is self-indulgent, since humans are already emotional.’ As part of Outside AiR, Sander invites applications to participate in a five-day workshop followed by a live public performance. Uncomfort Zone will explore the key aspects of his manifesto and his practice: dance will be a premise to refuse comfort, emotion and music, in favour of collision, maximum velocity and gravity as enhancements of — rather than inhibitions to — performance. Using his vast experience as an iconic performer and choreographer of high-impact dance, Sander will lead tasks that challenge the participants physically, mentally, and intellectually, culminating in a new performance in the Great Hall, People’s Palace at Queen Mary, University of London in March 2011.

The workshop is open to participants with all fitness levels, ability and experience. No training in dance is required.

To apply, send a short statement of interest and biographical information to Dominic Johnson at: d.f.johnson@qmul.ac.uk before the deadline of 5pm Wed 23rd February 2011.

For more information about the AiR Project visit http://www.airproject.qmul.ac.uk. 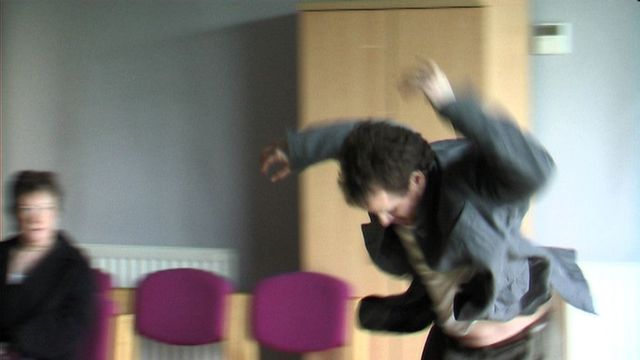 he is not here practice as research in dance University of Northampton, Avenue Gallery Wednesday 23rd Feb, 1.00pm-5.30pm Moving Forwards offers the opportunity to investigate current agendas in
Latest posts the land in you Attention Adam Phillips on attention Lithium Dancing (in plain sight) urgent time when we party we dance Children of the Soil an image is a call lost types of participation Go in and in Agatha Yu GIFs one of a crowd Force Majeure quality and quantity accents and bravery Force Majeure suzannah Dancing their unhappy freedoms uniqueness and sonder the body in time would have been frame.2 - connecting, moving & making online the arrow emerging experience Editorial: Shifting Dependence gabrielle stand by me cookie monster now: 4 October 2021 Cellule d’Essai 2021: A biography of sorts