Recovery (alias, the never-ending project) has another set of legs (and they are very exciting), and the team — Nat Cursio, Shannon Bott, Pete Brundle, Ben Cobham (Bluebottle), Ben Cisterne and Byron Scullin — are currently inhabiting the rehearsal space at Napier St in Melbourne. I’m doing a bit of ‘directing from a distance’ and we’ll pick up some more time in March 2012. A première is not far off (but I’ve written this before).

Colin Poole and I spent two weeks bookending the summer in Choreodrome (The Place’s biennial choreographic research project) and Colin, Simon & I is close to being ready to present. We showed 10 minutes in Touch Wood and are currently meeting to continue the project’s development. On Wednesday 11 January 2012 @ 6pm, we’ll present a pre-première of the work at Michaelis Theatre, Roehampton as part of Roehampton Dance’s Dance Diary programme. We’ll then première the work (proper) at The Place in Spring 2012. During the project’s development and rehearsal we’ve had timely input(s) from Bob Whalley, Lee Miller, Chris Bannerman and Amy Watson. www.colinsimonandi.com

In late August I traveled to Findhorn, Scotland to participate in Deborah Hay’s Solo Performance Commissioning Project. I’ve wanted to participate in the SPCP for some time, and have long been inspired by artists such as Ros Warby, Rachel Krische, Atlanta Eke and Joe Moran who have worked with Deborah. Deborah developed a solo I think not which she taught us, and since then I’ve been practicing it daily in order to première the work next year. At this stage I’ll be showing my adaptation of Deborah’s choreography in Leicester, UK on 8 March 2012, and then again in Auckland, NZ in the week leading up to Good Friday (day to be confirmed). I’ll also be presenting the work in London sometime in late February, and will look to show it off (never could words be more wrong) in Melbourne when I am there in the Antipodean Autumn. Details and research blog at skellis.net/spcp. Thanks again to everyone who commissioned the project — my singing may mean you wished you hadn’t.

Lastly, I’m in Melbourne and Auckland in March and April for a number of projects and workshops, and hope to catch up with my Australian and Kiwi dancing friends.

That’s it for now.

All the very best, Simon 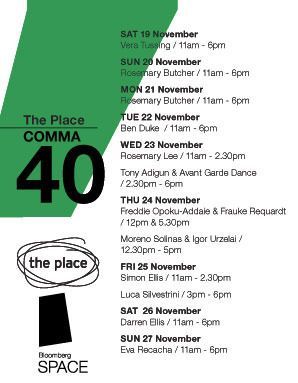 Booth: A Dance Fair
Latest posts a nest for hope Colin, Simon and I archive power of a lifetime now: 4 January 2023 brittle with relics the land in you Attention Adam Phillips on attention Lithium Dancing (in plain sight) urgent time when we party we dance Children of the Soil an image is a call lost types of participation Go in and in Agatha Yu GIFs one of a crowd Force Majeure quality and quantity accents and bravery Force Majeure suzannah Dancing their unhappy freedoms uniqueness and sonder the body in time would have been frame.2 - connecting, moving & making online the arrow emerging experience Editorial: Shifting Dependence